With designs that blend Eastern opulencewith Western minimalism, the Armenianjeweller dynasty Boghossian is a favouritewith the cultural elite and frequently takesa starring role at auctions

The sparkling pink diamond rests on a heart-shaped white bril-liant three times its size. A glittering band made from tiny, brightpink diamonds melds with a second band of white brilliants; to-gether, they form a kissing ring with a snake’s head end. Nothinginterrupts the dazzling play of light across the brilliants, one en-throned on top of another. The gems appear united in an eternalkiss, each lighting up the other.

The extravagant glamour of their Kissing Collection is a sourceof pride for the Boghossians: “It’s pure sensual refinement,” en-thuses Managing Partner Roberto Boghossian. Together with hisbrother Ralph, who is in charge of research and development, andhis uncle Albert, the company boss, he runs the family firm fromits headquarters in Geneva. The floating, weightless interplay thatthe gemstones appear to have is achieved using a highly sophisti-cated technique. They are placed on top of one another in such away that their metal or gold settings become practically invisible,creating the illusion that the stones are joined together in an em-brace, as it were. Then there are the complicated cuts, which needto harmonise perfectly. Not to mention the selection of the stonesthemselves, a task that requires an immense amount of experience.

This is something that the family of jewellers, now in its sixthgeneration, has ample quantities of. The origins of the Armenianfamily company go all the way back to 1868 and to the 7000-year-old Turkish city of Mardin, situated close to the Syrian border inwhat was historically Mesopotamia. Today a UNESCO world her-itage site, Mardin was once an important trading city on the SilkRoad. One of its residents was Ovannes Boghossian, a jewellerymaker who sold his wares to both locals and travelling merchants.He and his son were much in demand for their craft, but it wasOvannes’s grandson, Ohannes, who first expanded the business.He began journeying to Aleppo, Beirut and Cairo, on horsebackand by ship, searching for increasingly rare pearls and diamondsand trading with other merchants.

The Armenian Boghossian family has been

in the jewellery business for six generations.From the city of Mardin, where great-grand-father Ovannes Boghossian manufacturedjewellery, the family went on a journey thattook them to various locations in both theeastern and western hemispheres and eventu-ally to Geneva, where they established theircurrent headquarters. These multinationalroots shape the modern-day aesthetic of theglobally successful brand: oriental opulencemeets occidental minimalism. The exclusivejewellery is sold in boutiques in Geneva,Gstaad, Hong Kong, London and NewYork. The Boghossian Foundation, foundedin 1992 by Robert Boghossian and his twosons Jean and Albert, supports art and cultur-al projects.

When the First World War broke out, Ohannes was forced toclose down his workshop, working as a waiter in order to feed hisfamily. A year after the end of the war, he opened a boutique inAleppo, Syria, from where he established himself and his sons asrenowned traders between the eastern and western hemispheres.From 1950 onwards, Robert Boghossian, Ohannes’s eldest son,made increasingly frequent trips to China where he sourced finenatural pearls, gradually becoming a much sought-after specialistin the Middle East.

In 1960, the family settled in Beirut, at that time an elegant me-tropolis. Society ladies couldn’t do without their exquisite preciousstones, brought back from India, Burma, Thailand and Colombiaby Robert’s eldest son Jean, who made frequent expeditions tothese regions over the following years. At the same time, he ac-quired invaluable knowledge of gemstone cutting and built up afirst-class network made up of the foremost dealers in each coun-try. To escape the Lebanese civil war, Jean made the decision in themid-1970s to settle in Antwerp as experts in emeralds, rubies andsapphires. Not only were they soon the main suppliers to collectorsand buyers of these precious wares, they also built up a substantialprivate collection of spectacular coloured gemstones.

The generation who are still active today have been on the scenesince 1980: this was the year that Albert Boghossian took the helm,together with his nephews Roberto and Ralph and daughter Dalia.Geneva, once a hub of gemstone trading between Asia, Americaand the Middle East, became the company headquarters, whilst2008 saw the launch of Maison Boghossian. This was the begin-ning of the company’s rise to becoming a global brand – a brandwith a unique ability to blend the cultural heritage of East andWest thanks to its multinational roots.

“The design of our jewellery speaks the language of both Eastand West,” company boss Albert Boghossian explains. “We comefrom the East, and have found success in the West. We have theEast to thank for the oriental opulence and ornamental intricacy ofour aesthetic, whilst the West gives our creations their fluid, airyquality, their boldness, and the innovative technologies to bringthem into being.” Besides the Kissing method, another of Boghoss-ian’s signatures is the Merveilles technique. Here, diamonds areplaced seamlessly next to each other so that the gold or metalmounts that hold them can no longer be seen. This creates a chore-ography of light that is “simply amazing”, Ralph Boghossian ex-plains. “These natural wonders – Kashmir rubies, emeralds or bluediamonds – are ten thousand years old. With our exceptional set-ting techniques, we awaken their eternal energy.” Impressive ex-amples include the elliptical Merveilles Halo earrings, and theMerveilles Eternity wedding ring, which is decadently set withcolourless diamonds on both the inside and outside.

“Designing jewellery is like painting with light,” Albert enthus-es, mentioning the inlay technique, which dates back to the An-cient Egyptians. “We are revitalising it,” explains Albert. “It in-volves setting one stone inside another,” his nephew Roberto con-tinues. “In order to do this, the stones have to be very precisely cutand shaped. For example, we embed sapphires in mother-of-pearl,or combine turquoise with diamond inlays. The effect created islike a canvas painted with jewels.”

The Boghossians also love to experiment, finding inspiration insome unconventional objects. For example, the sensational Man-uscript Bracelet was inspired by a page from a 15th century Germanbook manuscript. Delicate garlands of natural pearls curve elegant-ly around flowers formed of unusually coloured diamonds; theoverall effect is extraordinarily beautiful. It took ten years just forthe jewellers to collect up the coloured diamonds they needed, andanother eighteen months before the bracelet was completed. Un-surprisingly, the piece was sold for a record 4.5 million dollars atthe Christie’s jewel auction in Hong Kong in 2018.

“The gems speak to me.That’s how it starts.

I see them, hold them,touch them and feel howthey inspire me to find aform for them”

But such lofty price tags are nothing unusual for Boghossian. In-ternational customers cannot resist the inimitable allure of theiriconic one-off pieces: in 2020, for example, a connoisseur paid sev-en million dollars at Christie’s for a double rivière necklace boast-ing 28 near-flawless emeralds (weighing a total of 117.60 carats). Asecond, inner row of oval and square-cut white diamonds comple-ments the emeralds and brings out the nuances of their greens. Ex-ceptional pieces such as this are usually designed by Edmond Chin,Creative Director at Boghossian. “For me, he’s the best jewellerydesigner in the world,” says Roberto. Chin grew up in Singaporeand studied geography at Oxford. Starting in 1994, he spent fiveyears as the head of the jewellery department at Christie’s in HongKong, before opening his own studio in 2001. He joined Boghoss-ian in 2015. “We complement each other perfectly,” Albert says.“Edmond is experimental. He wants his creations to bring dy-namism and vibrancy to women’s bodies.” Chin explains that hislove of gems started as a child, when his parents introduced him tothe joys of jewels and jewellery. “The gems speak to me. That’s howit starts. I see them, hold them, touch them and feel how they in-spire me to find a form for them.”

With locations in Geneva, London, New York, Hong Kong andGstaad, Maison Boghossian is small compared with giants such asCartier and Tiffany. “Our aim is to grow with care, maintaining ourunique signature,” says Head of Research and development RalphBoghossian.

Europe remains the company’s most important market. Along-side the headquarters in Geneva, Brussels also plays an importantrole. Here, the Boghossians bought and restored the art deco VillaEmpain, which now houses their cultural foundation, the Fonda-tion Boghossian. As bridge-builders between East and West, thefamily is involved in social and humanitarian initiatives for peoplewhose lives have been devastated by war and natural disasters inArmenia and Lebanon. They also support art and cultural projects.“Because art facilitates dialogue between cultures and allows peo-ple from all backgrounds to dream,” Albert Boghossian says. This isanother way in which the Boghossians stay true to their roots andto their motto: “We want to be continually challenging ourselves.”

“The design of our

the language of both

The catch-up race is on 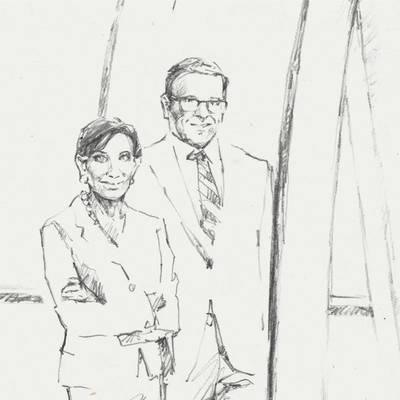 We need a greater sense of compassion